What Can Methlylene Blue Do For You? 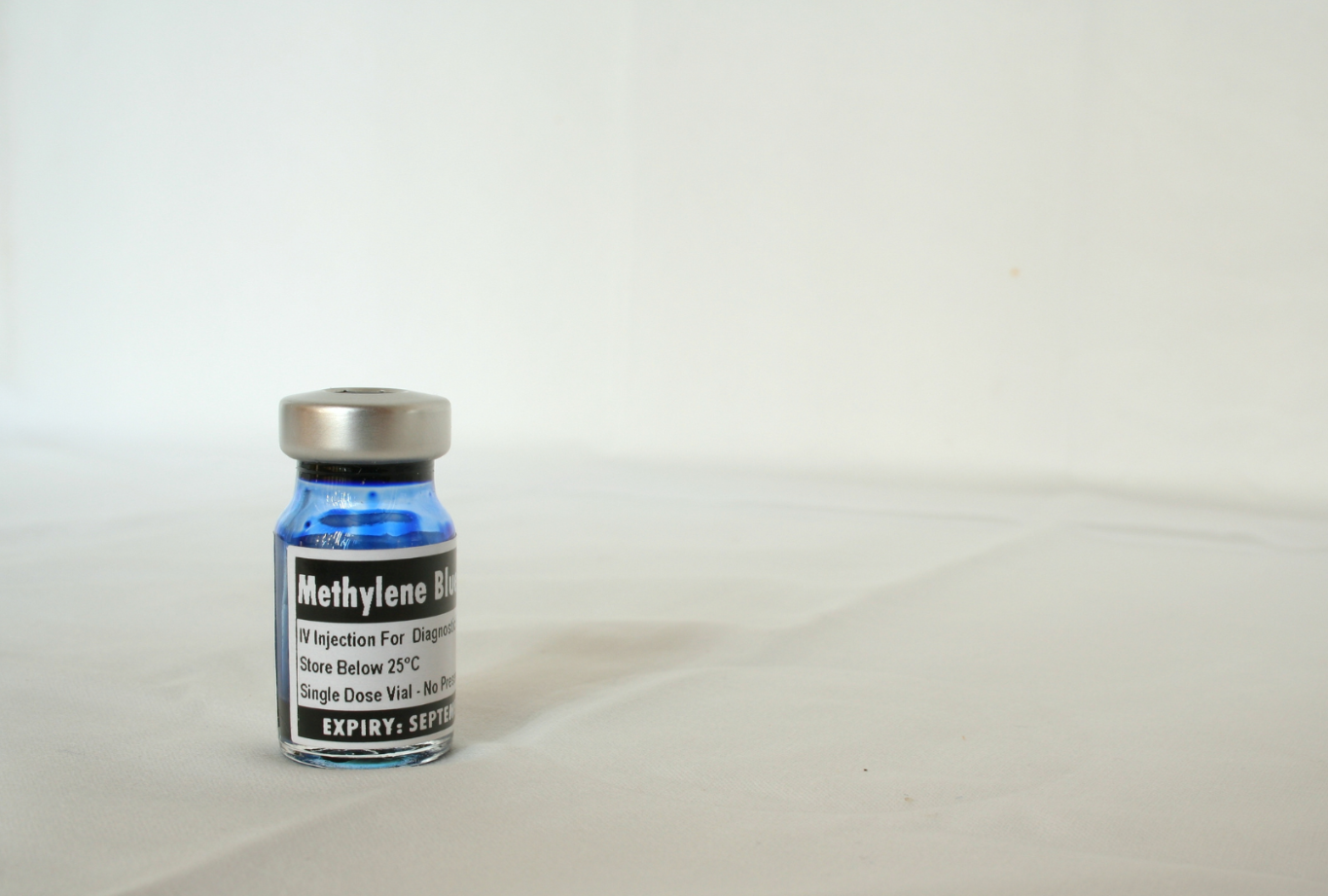 I am always on the lookout for new arrows we can place in our regenerative medicine and anti-aging quiver, and I’m thrilled to announce that The Institute now offers intravenous methylene blue (MB) treatment!

The reason this is such an important announcement is because MB may improve your overall health in a number of ways, from boosting ATP production and pumping up the health of our mitochondria, to its nootropic traits, including improved memory, learning and overall brain function.

Methylene blue can also be paired with several of our other treatments, including red light therapy, NAD+ and EBO2 procedures to enhance their effectiveness and potentially increase the benefits.

A Brief History of Methylene Blue

Methylene blue is a blue dye developed by scientists in the 19th century for the textile industry. In addition to being a brilliant blue dye for fabric, surprisingly, it was soon discovered to be useful in the scientific laboratory and in medicine.

Its most common use in medicine is for the treatment of methemoglobinemia. Methemoglobinemia is a blood disorder in which too little oxygen is delivered to your cells. As you know, oxygen is carried through your bloodstream by hemoglobin, a protein that’s attached to your red blood cells. When functioning properly, hemoglobin releases oxygen to cells throughout your body.

However, there’s a specific type of hemoglobin known as methemoglobin that carries oxygen through your blood but doesn’t release it to the cells. If your body produces too much methemoglobin, it can begin to replace your normal hemoglobin.

The unfortunate result is that the cells become starved for oxygen, thus causing a patient to suffer from methemoglobinemia. Methylene blue is an FDA-approved medicine to treat methemoglobinemia, as well as a host of other ailments, and it has a long safety history and profile with the agency. It has been evaluated for decades and is safe to use to treat a variety of issues.

Methylene blue acts on multiple cellular targets and mechanisms, but many of its potential beneficial effects are ascribed to be mitochondrial (remember that the mitochondria are the organelles in our bodies that produce ATP).

But the real mechanism of action concerns the ability of methylene blue to donate electrons. I realize my explanation below will get a bit technical, but it’s important to understand why and how MB is so potent and important to regenerative medicine.

First, if you recall your high school science classes, ATP (adenosine tri-phosphate) is the body’s energy currency. ATP is produced in a number of ways: glycolysis, the Krebs cycle, and the electron transport chain - where a majority is created. The production of ATP is called cellular respiration.

With methylene blue, we are especially interested in the electron transport chain. On this note, think of ATP like a rechargeable battery. When ATP loses a phosphate bond it gives up energy and becomes ADP. ADP is short for adenosine di-phosphate + phosphate. When a cell needs energy, the phosphate molecule is released and the energy that had been holding on to the phosphate molecule is now available to do work for that cell. This is how energy is given to the cells.

The real mechanism of action in regards to ATP concerns the ability of methylene blue to donate electrons. This happens when low-dose methylene blue stimulates mitochondrial respiration by donating electrons to the electron transport chain. This makes methylene blue unique among chemicals for several important reasons.

First and foremost, it has an auto oxidizing property that allows MB at low concentrations to form an equilibrium by cycling electrons (i.e., serving as both an electron donor and acceptor). This property permits the cycling of electrons from chemicals inside the mitochondrial matrix to electron transport proteins in mitochondria.

These transport proteins act as acceptors for electrons donated by methylene blue in mitochondria. The final acceptor of electrons in the respiratory chain is oxygen, which is obtained from oxyhemoglobin transported in the circulation.

Molecular oxygen is then reduced to water in a reaction catalyzed by the mitochondrial enzyme cytochrome oxidase (Complex IV, cytochrome c oxidase which has the abbreviation Cyt c). Methylene blue enhances the function of cytochrome oxidase (complex IV), making it work faster and more efficiently. This leads to increased oxygen consumption and increased ATP production, especially in the most metabolically active cells like the nerve cells in memory regions of the brain.

Methylene Blue and the Brain

Methylene blue concentrates in tissues with the most mitochondria (e.g. the brain where it readily crosses the blood brain barrier, the heart, the liver, and kidneys). In this regard, methylene blue does a few different things.

First, MB is a blood-brain barrier-permeable antioxidant, which makes it extremely unique because many antioxidants never make it into the brain. Methylene blue, on the other hand, quickly crosses the blood-brain barrier. It also improves mitochondrial efficiency and respiration, acts as an antioxidant, and increases brain cell lifespan, resulting in improved memory and mood.

At low dosages, methylene blue is used to enhance mitochondrial function, increase cerebral blood flow, and acts as an antidepressant. Methylene blue’s uncanny ability to selectively target diseased tissues (especially aging in the brain) is related to the health of our mitochondria.

Because of this, methylene blue holds great potential to combat a variety of neurological conditions including stroke, traumatic brain injury, depression, Parkinson’s disease, and Alzheimer’s.

If you haven’t heard of the word before, a ‘nootropic’ is a substance capable of enhancing brain or mental function. Nootropics can help you boost memory, learning and overall brain capability. Nootropics, often called “smart drugs,” are a class of substances that are studied for their ability to aid brain performance. They are sometimes called cognition enhancers or memory enhancing substances.

Prescription nootropics are medications that have stimulant effects. The Air Force dispenses a “go to” pill, used by pilots to stay sharp called Provigil. Provigil is already renowned for its ability to keep people awake. Lately, however, the drug is getting attention for doing more than that. It seems that a lot of people are taking Provigil to try to increase intelligence. Methylene blue fits in the same category.

Methylene blue’s high reward, low-risk profile makes it one of the most exciting supplements in the biohacking world. Case in point, a recent study of 26 healthy volunteers aged 22 – 62 participated in a double-blind, randomized, placebo-controlled clinical trial involving MB.

The purpose of the study was to measure the effects of methylene blue on working memory and sustained attention. Study results showed that a single low-dose of MB resulted in an increase in short-term memory ability.

One drawback of methylene blue is that it can potentially cause serotonin syndrome.

This is a rare but potentially dangerous health condition caused by excess levels of the neurotransmitter serotonin.

Too much of one or more of these neurotransmitters can lead to symptoms like rapid heart rate, high blood pressure, sweating, shivering/shaking, nausea and vomiting, confusion and disorientation, agitation, and anxiety.

Do not take this medicine with any of the following medications:

The Exciting Ways The Institute will Utilize Methylene Blue

As we’ve covered, methylene blue has the potential to be a game changer in regenerative and anti-aging medicine. We will certainly offer it as a stand-alone procedure, but the powerful benefits come when we partner it with other modalities.

One such modality is the use of methylene blue and the red-light sauna room, where MB will be able to increase its effectiveness due to its photosensitivity.

Another exciting protocol is the utilization of MB and intravenous NAD+. This will provide a significant one-two punch for general well being and especially brain health.

Also, we look forward to combining methylene blue and our EBO2 technique, taking this potent treatment to the next level.

And that’s just the tip of the iceberg!

The sky is truly the limit with methylene blue!

For more information on methylene blue or to book your treatment, click here.