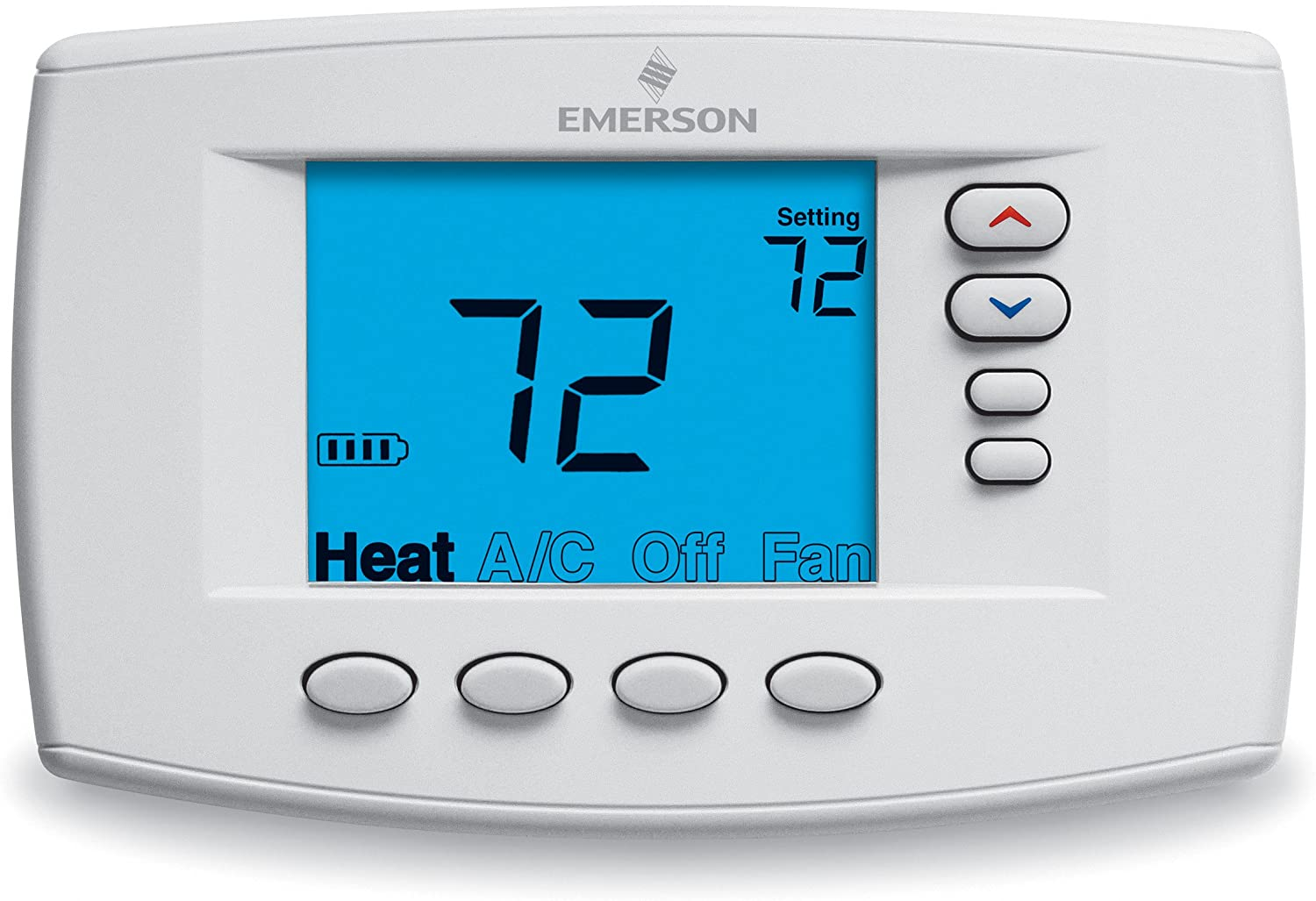 Nrf2 is also called the Nuclear factor erythroid 2-related factor 2. NRF2 is a transcription factor that activates over 500 genes. The main reason NRF2 is so highly sought, is because it is a key transcriptional regulator of several antioxidant and anti-inflammatory enzymes. Nrf2 is now recognized to be involved in the cellular response to multiple stressors including foreign substances, excessive nutrient/metabolite supply, inflammation, and the accumulation of misfolded proteins. The Nrf2 protein, known as a transcription factor because of its ability to control genes, is the key component of a pathway (a sequence of biochemical reactions in a cell) that senses and responds to changes in oxidative balance. Nrf2 is one of the body’s major pathways. We need to think of the pathways as the body’s computer software and the cells and organs as the computer hardware. Nrf2, in fact, regulates many hundreds of genes that have nothing to do antioxidant enzymes per se, but rather provide protection from a broader range of stress-related events that are encountered by cells, organs, and organisms, under both normal and pathological circumstances. The Nrf2 pathway is under tight control. When the Nrf2 protein in bound in the cytoplasm it is essentially inactive. The following illustration shows this concept. This illustration is essentially the essence of how the Nrf2 pathway functions. We must remember that Nrf2 is a protein. Proteins, although they are typically confined within the cell or on a cell, have a complicated life cycle. The illustration shows the complicated cycle of the Nrf2 ecosystem.

It actually demonstrates its actions in the cell. For example, soon after NRF2 is made by ribosomes in the cytoplasm, it is normally sequestered by KEAP1, which quickly loops the Nrf2 protein with ubiquitin ligase Cullin3 for transport to the proteasome. Here, the ubiquitin is stripped off and NRF2 is degraded and recycled. If all is well in the cell, this process gives NRF2 a half-life of about 20 minutes. Remember, if all is well in the cell Nrf2 is typically not active. Looking at the diagram in a different manner we see that the Nrf2 is held “prisoner” in the cytoplasm. The “prison guard” is called Keap1. If given the opportunity Keap1 will go on and destroy the Nrf2 protein. This is called proteasomal degradation. Given the right conditions (in this case a stress to the body) the Nrf2 protein breaks the stranglehold that the Keap1 proteins maintain. The Nrf2 protein then makes its way to the nucleus where it can eventually react with certain genes and produce certain beneficial compounds. A major mechanism in the cellular defense against oxidative or electrophilic stress is activation of the Nrf2-antioxidant response element signaling pathway. This explanation is basic but it gives the essentials of how the Nrf2 protein functions.

WHAT ARE THE STRESS CONDITIONS THAT STIMULATE THE NRF2 PATHWAY?

The Nrf2 pathway senses the need for antioxidant enzymes and regulates their production to maintain metabolic balance. The sensing components of the pathway chemically modify and release Nrf2 so that it may diffuse into the nucleus of the cell where the DNA resides. Once in the nucleus, the Nrf2 will start reacting with a variety of genes found in the DNA of the nucleus. It can then “switch on” or “turn off” the genes it controls (often termed survival genes) to produce the protected state within the cell. Our DNA encodes about 20,000 genes, each representing a “blueprint” for the production of a protein or enzyme necessary for a healthy existence. Each of these “blueprints” requires a regulating control called a “promoter” that determines precisely how much of each product is produced, and under what circumstances. By binding to one specific type of these switch-like promoter regions called the “Antioxidant Response Element (ARE)”, the Nrf2 factor controls the rate of production from hundreds of different genes that allow cells to survive under stressful conditions.

Once the Nrf2 translocates to the nucleus, it results in the production of Anti-Oxidant Response Elements. There are a number of these elements including Glutathione, Catalase, and a number of other anti-oxidants. We should think of these as endogenous antioxidants. Meaning they are made by the body. These are quite powerful. The next illustration shows more of the whole picture of the Nrf2 pathway. From the Nrtf2 stimulators to the actual response elements to the blocking of the reactive oxygen species (ROS) by the response elements. Ultimately, like many pathways in the body, the Nrf2 pathway targets the mitochondria. The illustration shows certain agents which block the Nrf2 and others which encourage its activation by disabling the stranglehold the Keap1 protein has on the Nrf2 protein. The following is a diagram of transcription factors: 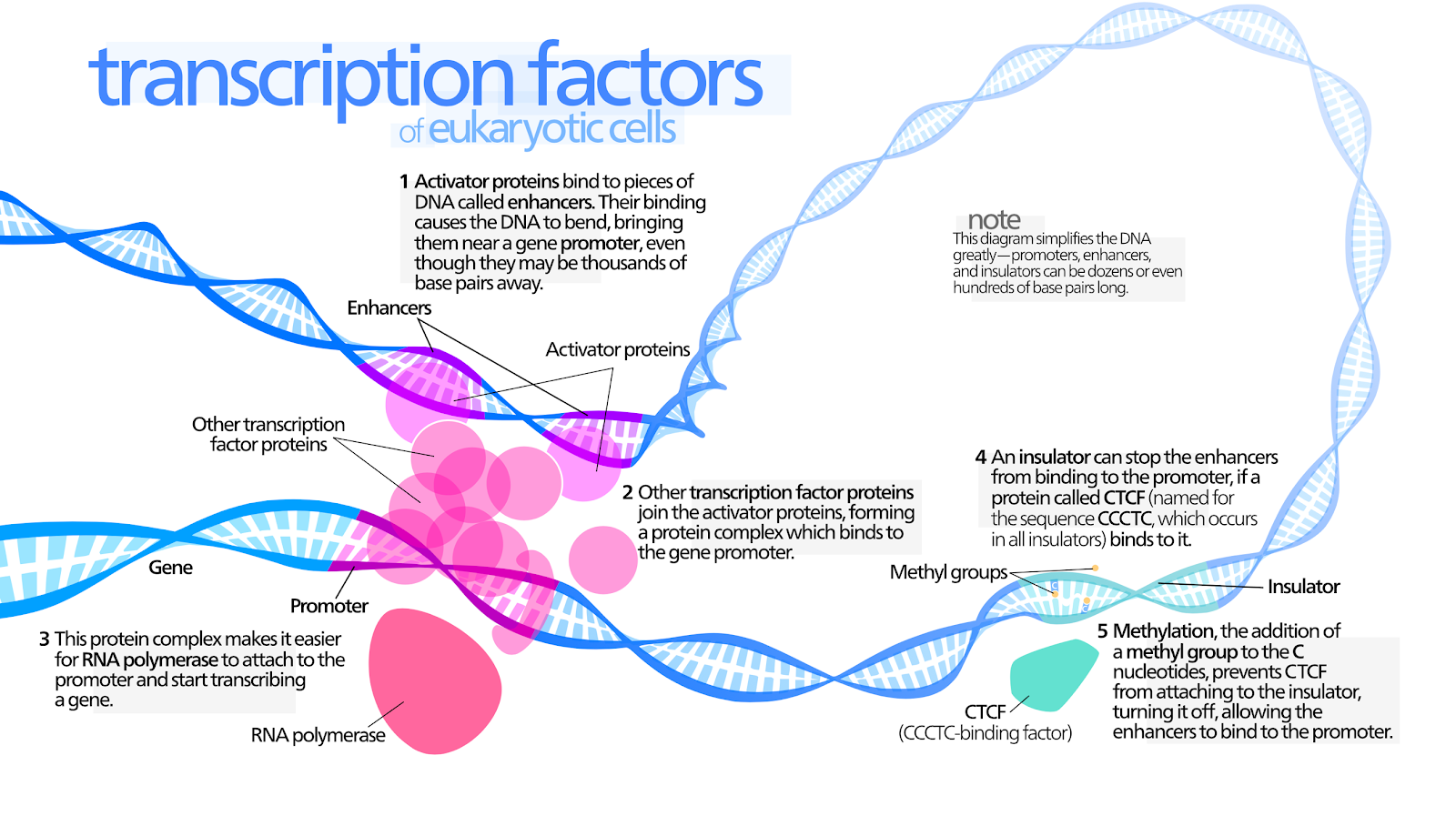 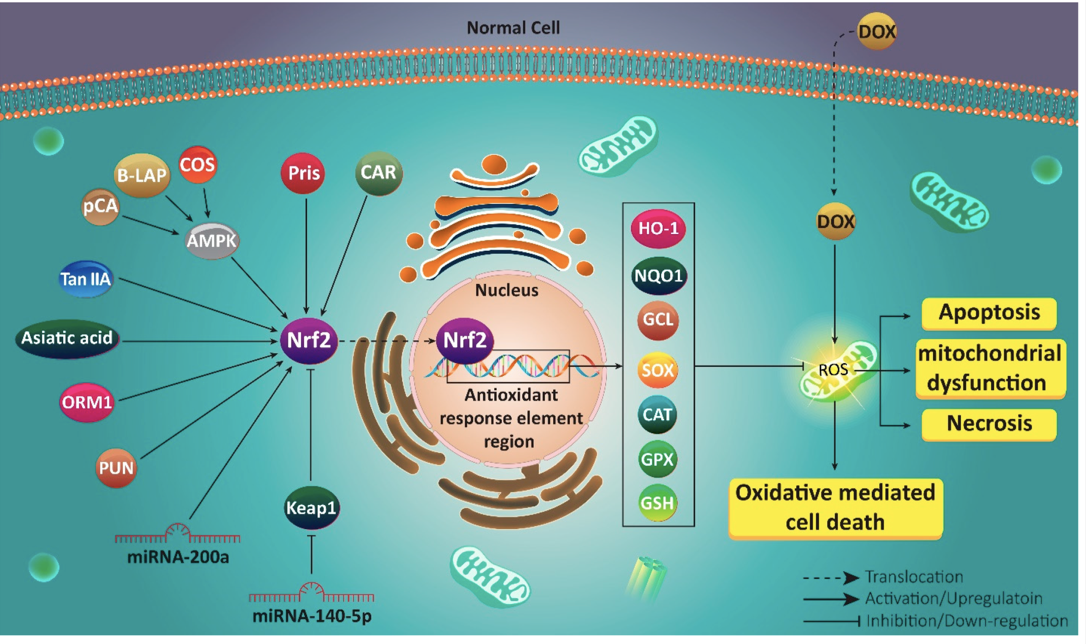 The illustration shows how Nrf2 handles the inflammation caused by the ROS. Inflammation is the most common feature of most chronic diseases and complications. Several studies have demonstrated that Nrf2 contributes to the anti-inflammatory process by orchestrating the recruitment of inflammatory cells and regulating gene expression through the antioxidant response elements (ARE). These genes produce a large variety of antioxidant enzymes that create a network of protection by neutralizing primary and secondarily generated oxidants and by cleaning up the toxic byproducts they leave in their wake. Also, they help to repair the damage the oxidants have caused. This is especially important for mitochondrial health. Mitochondria help produce free radicals (Reactive Oxygen Species=ROS) and at the same time are very susceptible to their damage.

Oxidants such as the superoxide radical (O2-) and hydrogen peroxide (H2O2) are produced by the process of “burning” the foods that sustain us. The Nrf2 pathway senses the need for these antioxidant enzymes and regulates their production to maintain metabolic balance. Several things can upset this delicate balance, the most significant one is aging. Unfortunately, aging slowly tips the balance toward the oxidative side resulting in “oxidative stress.” Disease processes can also result in overproduction of oxidants. Many major diseases associated with aging, such as heart attacks, stroke, cancer, and neurodegenerative conditions such as Alzheimer’s disease also increase production of oxidants thus creating oxidative stress and inflammation. When our immune cells are stimulated they can produce reactive oxidants (O2-, H2O2, OH, and HOCl) to deal with both bacteria and viruses. This can result in the destruction of the viruses and bacteria. But the problem with these compounds is that our otherwise healthy cells get caught in the cross-fire and sustain collateral damage that we see and feel as inflammation. Unfortunately, we have seen this phenomenon in patients with a Covid 19 infection. They get such a vigorous immune response it is called a cytokine storm. Cytokine storms are one of the contributing factors to the high numbers of Covid deaths.

HOW CAN WE HELP STIMULATE NRF2? 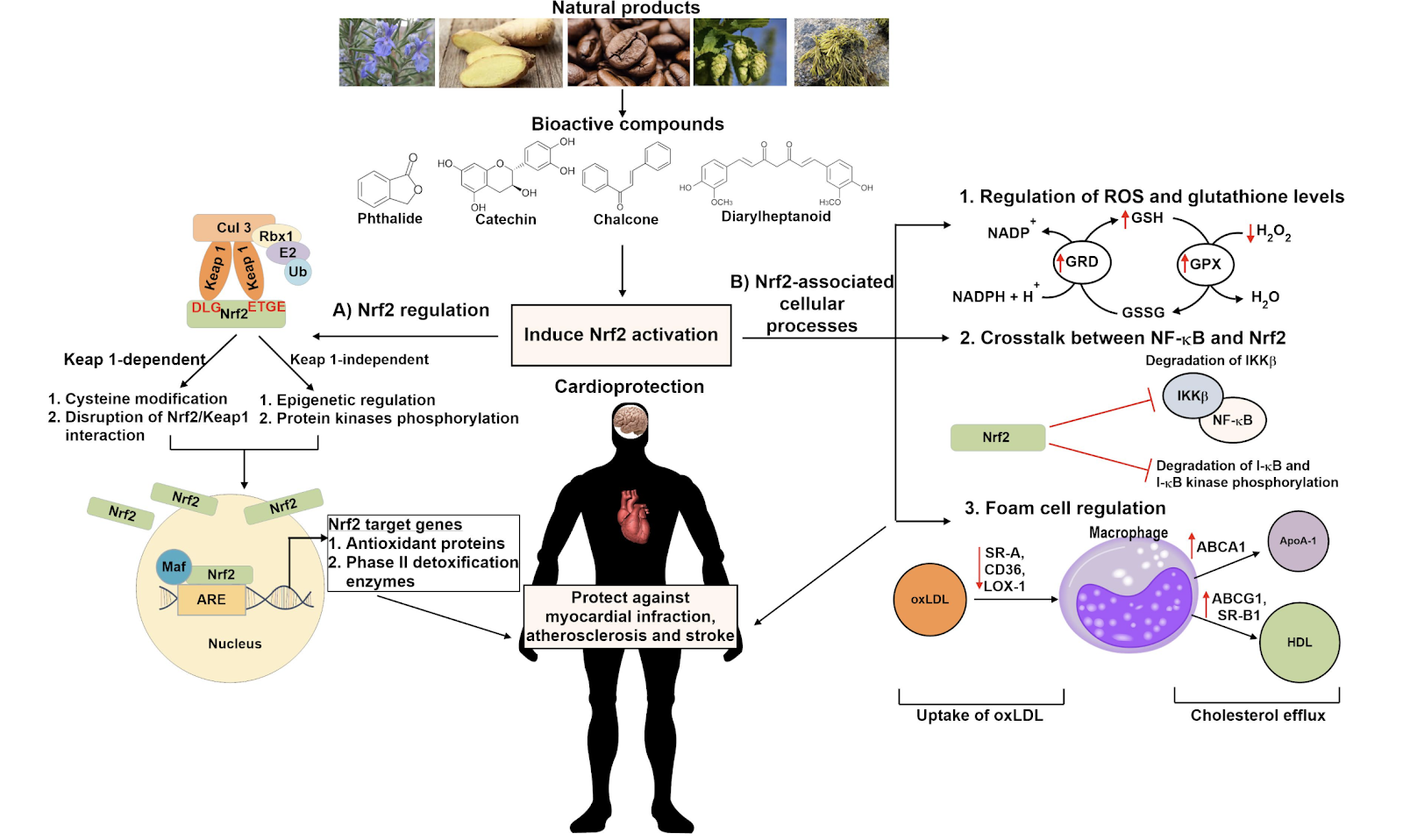 Recent research has identified certain processes to be very effective at stimulating our body’s natural mechanisms for creating antioxidants through NRF2 activation. NRF2 activation can be achieved thru exercise, calorie restriction (including fasting) and ingestion of natural nutrients that are NRF2 activators. In our office we have found that intravenous Ozone is a potent stimulator of the Nrf2 pathway. The intravenous Ozone is part of a protocol called the EBO2 protocol. The intravenous Ozone momentarily produces Hydrogen Peroxide. The Hydrogen Peroxide is quickly converted into compounds called Ozone Messengers. These Ozone Messengers result in the stimulation of the Nrf2 pathway. They ultimately help to reduce inflammation. Other in office Nrf2 stimulants include intravenous Curcumin, Quercetin, and Resveratrol. Intravenously, these are very potent Nrf2 stimulants. Since they are given intravenously they become very bioavailable compared to their oral formulations.

The question becomes what else can we do stimulate the Nrf2 pathway without a trip to the doctor’s office? We have already mentioned the usual suspects such as exercise, calorie restriction, modified keto type diet etc. However, we can still help to supplement Nrf2 stimulation with some oral compounds. In an ideal world one would first get some supplements intravenously and then proceed with lifestyle changes and oral compounds.

Common NRF2 activators include Curcumin which is a widely studied and potent Nrf2 activator. The problem with Curcumin is its bioavailability. Not all Curcumin compounds are the same. Other stimulators include Pterostilbene and its weaker cousin Resveratrol. The problem with oral Resveratrol is also its bioavailability.  Other stimulators include Quercetin (from onions) and sulforaphane (from broccoli) and antioxidants found in green tea, chocolate, and other sources. Different nutrients may activate NRF2 by different mechanisms and, when taken together, may be synergistic.

I have taken the bull by the horns and designed a supplement which I feel will be unlike anything out there. The propriety blend of ingredients are:

Some of these are well known while others may be new. One of the common threads with these particular compounds is that by and large they have much better bioavailability then their similar counterparts. Brassica is a broccoli derivative. Ultracur is a Curcumin derivative. They both have much higher bioavailability then competing products.     One interesting item in this list is Fumaric acid. Fumaric acid is the “Crown Jewel” of this formula. A derivative of Fumaric acid has been approved by the FDA in the treatment of relapsing forms of Multiple Sclerosis. It is also used in the treatment of psoriasis. Currently I am not aware of any Nrf2 supplement blend that is utilizing Fumaric acid derivative mixed with other supplements to stimulate Nrf2. This product should be available shortly.

By raising Nrf2 levels, we are able to tap into one of nature’s most powerful mechanisms for the maintenance of good health. Regular consumption of these Nrf2 stimulating foods and supplements may substantially lower many of the health risks of modern living and increase our resistance to many diseases.

IN REVIEW WHAT ARE THE PRACTICAL BENEFITS OF THE NRF2 ACTIVATORS?

Activation of NRF2 is believed to provide many health benefits including:

Nrf2 activation may have a positive impact on chronic inflammation and oxidative stress and so may be useful in the prevention or treatment of many common chronic disease processes including obesity, high blood pressure, reducing the risk of diabetes, cardiovascular disease, stroke, and the list goes on and on. NRF2 activators have been shown to protect the liver in conditions of chronic hepatitis and fatty liver. Let’s look at some more specific conditions that are directly affected by the Nrf2 pathway.

Obesity is now thought to be a systemic disease characterized by increased systemic inflammation and oxidative stress. As a consequence, obesity is clearly understood to be a major contributor to the development of hypertension, heart disease, stroke and some cancers. The importance of Nrf2 in obesity and insulin resistance is clearly evident and the potential use of an Nrf2 activator as a treatment method will continue to be an exciting area to advance.

As a cellular metabolic and stress sensor, Nrf2 is a pivotal regulator of stem cell self-renewal, proliferation, and differentiation. Nrf2 displays cell type-specific and/or stage-dependent impact on stem cell biology in response to various environmental cues. Nrf2 maintain ASCs self-renewal, quiescence, and regenerative capacity while protecting against ASC depletion in response to stress and aging.

I suspect this will take on increasing importance in Regenerative Medicine stem cell procedures. We have seen this concept already in organ transplants and rejection. As time goes on, we may depend more on allogeneic sources of stem cells which exhibit immune evasive rather than privileged responses to the immune system.