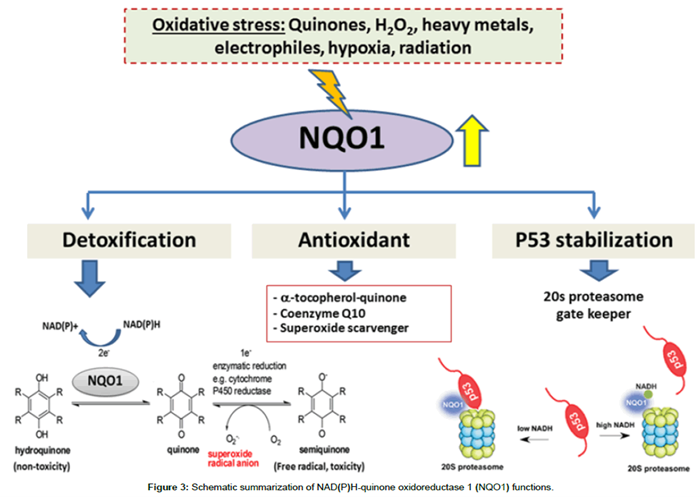 NQO1 is a gene which controls the production of the enzyme NAD(P)H dehydrogenase, quinone 1. The above diagram shows some of the many functions of the NQO1 pathway. We can see that there are three major pillars of health that NQO1 directly influences. These pillars include detoxification which entails the ratio of NAD to NADH, its ability as an antioxidant, and lastly how it helps to stabilize the P-53 gene. Detoxification and antioxidant activity go hand and hand. They are intertwined with each other. Each of these pillars have extreme importance for our health and well-being.

The detoxification pillar is a very important aspect of NQO1 functions. Much of the detoxification deals with compounds called Quinones. Quinonoid compounds generate reactive oxygen species (ROS). Quinones are ubiquitous in nature and constitute an important class of naturally occurring compounds found in plants, fungi and bacteria. Human exposure to quinones therefore occurs via the diet, but also clinically or via airborne pollutants. For example, the quinones of hydrocarbons are prevalent as environmental contaminants and provide a major source of current human exposure to quinones. The inevitable human exposure to quinones, and the inherent reactivity of quinones, has stimulated substantial research on the chemistry and toxicology of these compounds. NQO1 is employed in the removal of a quinone from biological systems as a detoxification reaction:  NAD(P)H + a quinone → NAD(P)+ + a hydroquinone. The hydroquinone is excreted. This reaction ensures complete oxidation of the substrate without the formation of semiquinones and reactive oxygen radicals that are deleterious to cells. The localization of NQO1 in epithelial and endothelial tissues of mice, rats and humans indicates their importance as detoxifying agents, since their location facilitates exposure to compounds entering the body. In addition to the detoxification, NQO1 helps produce NAD+ which in its own right is very important.

The ratio of NAD+/NADH is of extreme importance. We are well aware of the importance of NAD+ for our body. NAD+ is instrumental in the production of ATP which is the body’s energy currency. However, NAD+ is also used in a variety of biological processes in the body. Nicotinamide adenine dinucleotide (NAD+) is an essential pyridine nucleotide that serves as an essential cofactor and substrate for a number of critical cellular processes involved in oxidative phosphorylation and ATP production, DNA repair, epigenetically modulated gene expression, intracellular calcium signaling, and immunological functions. NAD+depletion may occur in response to excessive DNA damage due to free radicals. This damage results in significant poly (ADP-ribose) polymerase (PARP) activation and a high turnover and subsequent depletion of NAD+. PARP is instrumental in DNA repair. Also, chronic immune activation and inflammatory cytokine production results in accelerated CD38 activity and subsequent decline in NAD+ levels.

We now think that the NAD+/NADH ratio may be as important if not more important than the levels of NAD+. One of the insights arising from the scientific studies of calorie restriction is that the ratio of NAD+ to NADH (NAD+/NADH ratio) might be important for the lifespan extension benefits. This ratio has been reported to decline with age, with NAD+ being decreased and NADH increased in older individuals. While boosting the amount of NAD+ has been getting a lot of attention, improving the ratio between NAD+ and NADH might be more significant than the amount of cellular NAD+ in isolation. In yeast experiments, calorie restriction decreases NADH much more dramatically than it affects NAD+. This decrease in NADH is important for enhancing lifespan, because, on its own, it increases activity of the NAD+ consuming enzymes that boost longevity processes (e.g., Sirtuins) and DNA repair (e.g. PARPs) in yeast. This is thought to occur because NADH is an inhibitor of these enzymes, so lowering it releases the inhibition. As an example, inducing the enzyme NQO1—an enzyme that uses NADH as an electron donor increases intracellular NAD+ levels because it shifts the NAD+/NADH redox ratio in favor of oxidation (NAD+). A side effect of this reaction is that intracellular NAD+ levels increase. Upregulation of the pathway that induces NQO1 occurs in calorie restriction and appears to be an important component of producing the benefits. We must remember that cellular levels of NAD+ are more important than the serum levels.

In review, what NQO1 does is convert NADH to NAD+ while at the same time it maintains a very delicate ratio of NAD/NADH. This ratio is not affected by dietary or IV intake. One important fact is that NQO1 will oxidize NADH to NAD+ and thus it increases NAD+ in the cell.

HOW IS THE NQO1 PATHWAY REGULATED?

Another name for the NQO1 gene is the longevity gene.  NQO1, regulates the NAD+/NADH ratio in cells. NQO1 does this by oxidizing NADH to NAD+. During aging the ratio of NAD+ to NADH changes in part to a reduced level of the expression of NQO1. As we age the cells accumulate a type of protein called BET proteins. The BET proteins are Bromodomain and Extraterminal Proteins. They are referred to as epigenetic readers. The following diagram shows the various components involved in epigenetics, namely the writers, erasers, and readers all of which effect gene behavior. 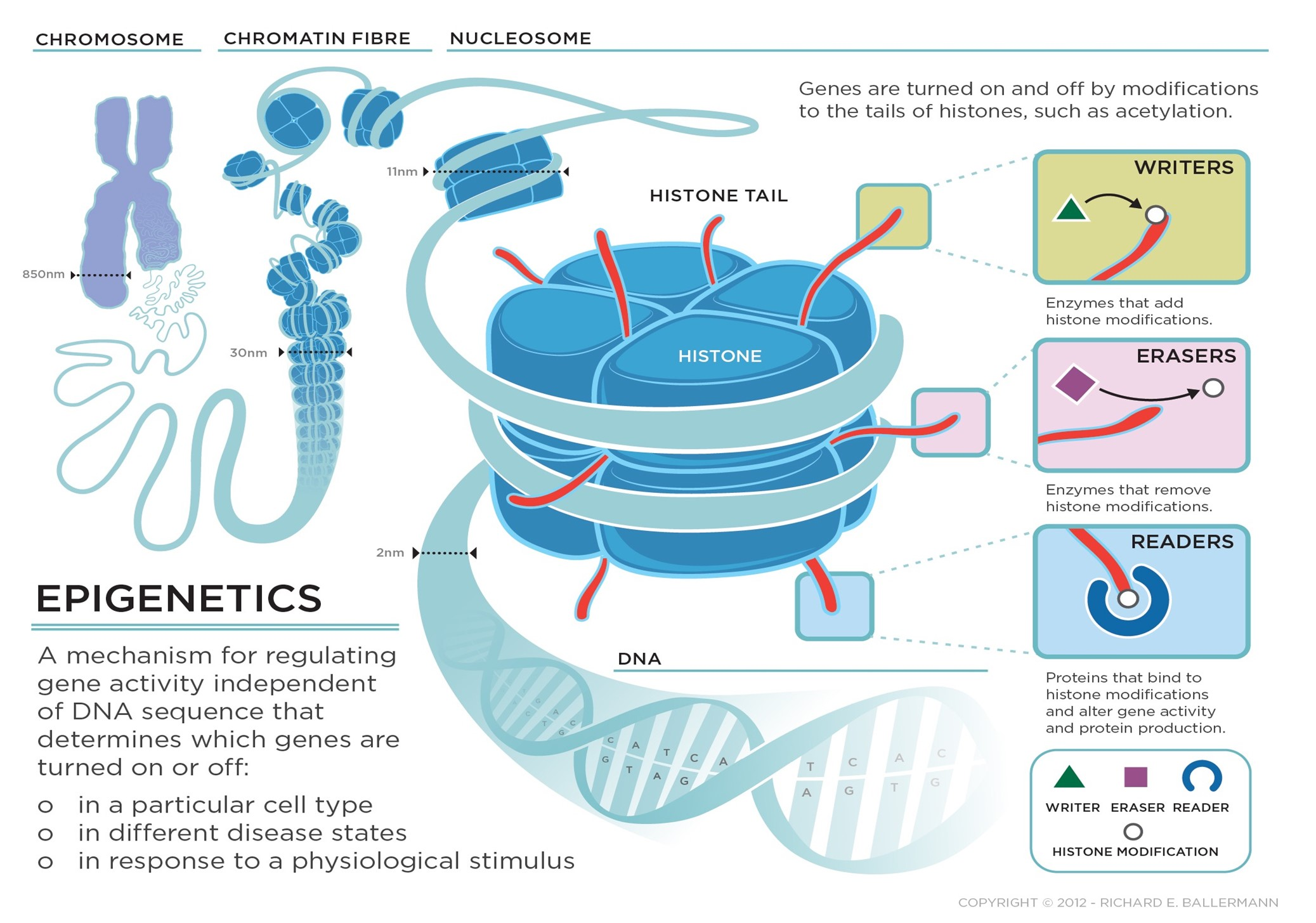 In this case, the BET proteins will suppress the induction of the NQO1 gene. There is now much research looking for inhibitors of BET proteins for a variety of conditions including cancer.

Lowered levels of NQO1 will affect the amounts of a compound called Peroxisome proliferator-activated receptor-gamma coactivator (PGC-1alpha). PGC-1a is a member of a family of transcription coactivators that plays a central role in the regulation of cellular energy metabolism. It is strongly induced by cold exposure, linking this environmental stimulus to adaptive thermogenesis. PGC-1alpha stimulates mitochondrial biogenesis and promotes the remodeling of muscle tissue to a fiber-type composition that is metabolically more oxidative and less glycolytic in nature, and it participates in the regulation of both carbohydrate and lipid metabolism. Oxidative metabolism produces far more ATP than the glycolytic type. It is highly likely that PGC-1alpha is intimately involved in disorders such as obesity, diabetes, and cardiomyopathy. In particular, its regulatory function in lipid metabolism makes it an inviting target for pharmacological intervention in the treatment of obesity and Type 2 diabetes.

PGC-1a is regulated by the oxidative state of the cell. NQO1 will regulate the PGC-1a levels by controlling the rate of PGC-1a degradation not its synthesis. Like many regulatory factors, PGC-1a has an extremely short half-life.  All of these extremely short-lived proteins are regulated by degradation rates, not synthesis rates. Higher levels of NQO1 shift the ratio of NAD+/NADH and protect proteins from being oxidized. PGC-1 plays an important role in regulating mitochondrial function. Higher levels of PGC-1a help prevent age related mitochondrial dysfunction. Thus, it appears that under conditions of oxidative stress, such as with aging, NQO1 may be a major factor that controls the concentration of PGC-1a in the cell. PGC-1a is not some esoteric co factor, it is extremely important in many different functions as can be seen from the following diagram. PGC-1α is a transcriptional coactivator that is a central inducer of mitochondrial biogenesis in cells. 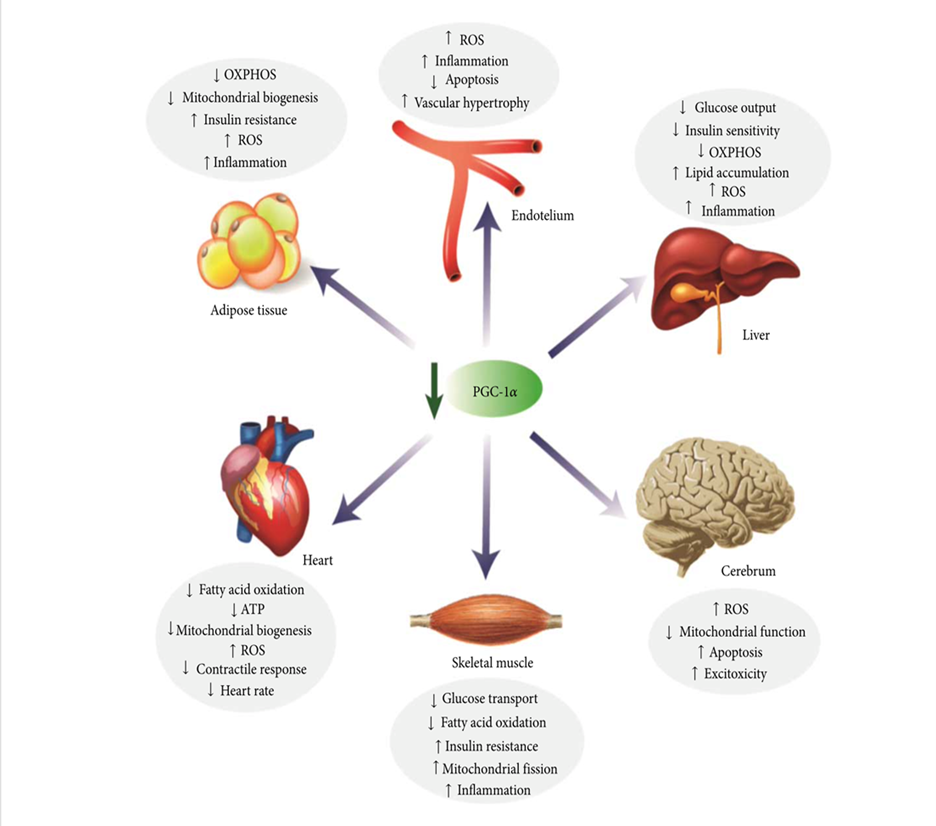 Thus, it appears that under conditions of oxidative stress, such as with aging, NQO1 may be a major factor that controls the concentration of PGC-1a in the cell.

WHAT ELSE DOES NQO1 STIMULATE?

NQO1 seems to have a significant effect on the P-53 gene. It helps to stabilize the P-53 gene. P-53 is many times referred to an the “Tumor Suppressor Gene”. It is a potent sentinel in the body looking for and destroying cells which may go on to tumor lines. It has the ability to fix DNA damage if it is not too severe or if too severe it will destroy the cell. The following diagram shows P-53 in action: 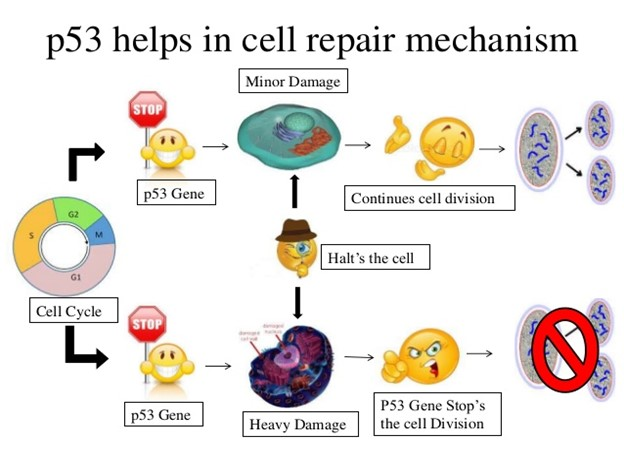 It is now thought that many cancers arise from a defect in the P-53 gene. It appears that the NQO1-dependent (ubiquitin-independent) pathway is the most important pathway for regulating p53 levels within the cell. Ubiquitin is a small protein that is found in almost all cellular tissues in humans and other organisms. It helps to regulate the processes of other proteins in the body. Through a process known as ubiquitination or ubiquitylation, a ubiquitin molecule can bind to a substrate protein, changing the way it functions. This can lead to a number of different outcomes. It is most widely recognized for its role in apoptosis of proteins, earning it the title of the molecular “kiss of death” for proteins, although it also plays a major part in several other cellular processes related to the regulation of proteins. If P-53 is working properly hopefully the chances of a cancer arising are significantly diminished. Treatment with curcumin augments the levels of P53 in tumor cell lines through incrementing its half-life in a NQO1 dependent manner. Curcumin treatment promotes the interaction between NQO1-p53.

HOW CAN WE INCREASE THE PRESENCE OF NQO1?

One statement that can be made across the board is that anything which increases the NRf2 pathway will increase the NQO1 gene action. The NRf2 pathway has a profound effect on the NQO1 gene. One can read my previous blogs concerning the NRf2 pathway. I call this pathway the thermostat of anti-inflammation. One of the important stimulators of the NRf2 pathway are ozone messengers which are produced by intravenous ozone such as is delivered by the EBO2 protocol. These messengers will allow the NRf2 to enter the nucleus and activate certain genes. Another offshoot of the EBO2 protocol is the use of photodynamic therapy which stimulated the NQO1 gene. Phototherapy also includes the stimulation of heat shock proteins which are encouraged by the exposure of UVA light. 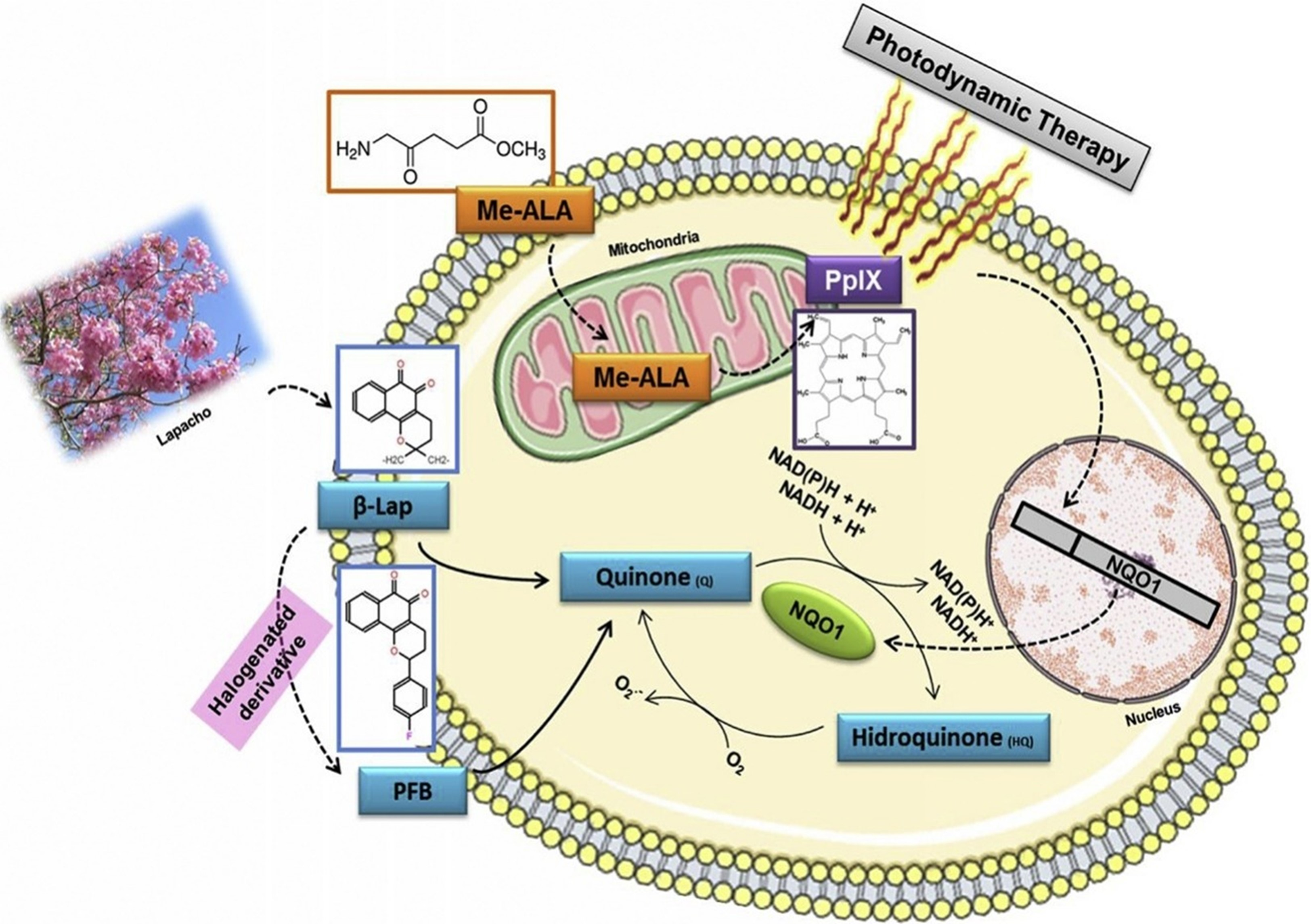 Again, for those people unaware of the EBO2 protocol, it is a protocol which uses a dialysis filter, intravenous Ozone gas, and photo modulation. The following is a picture of the set up used in the EBO2 protocol: 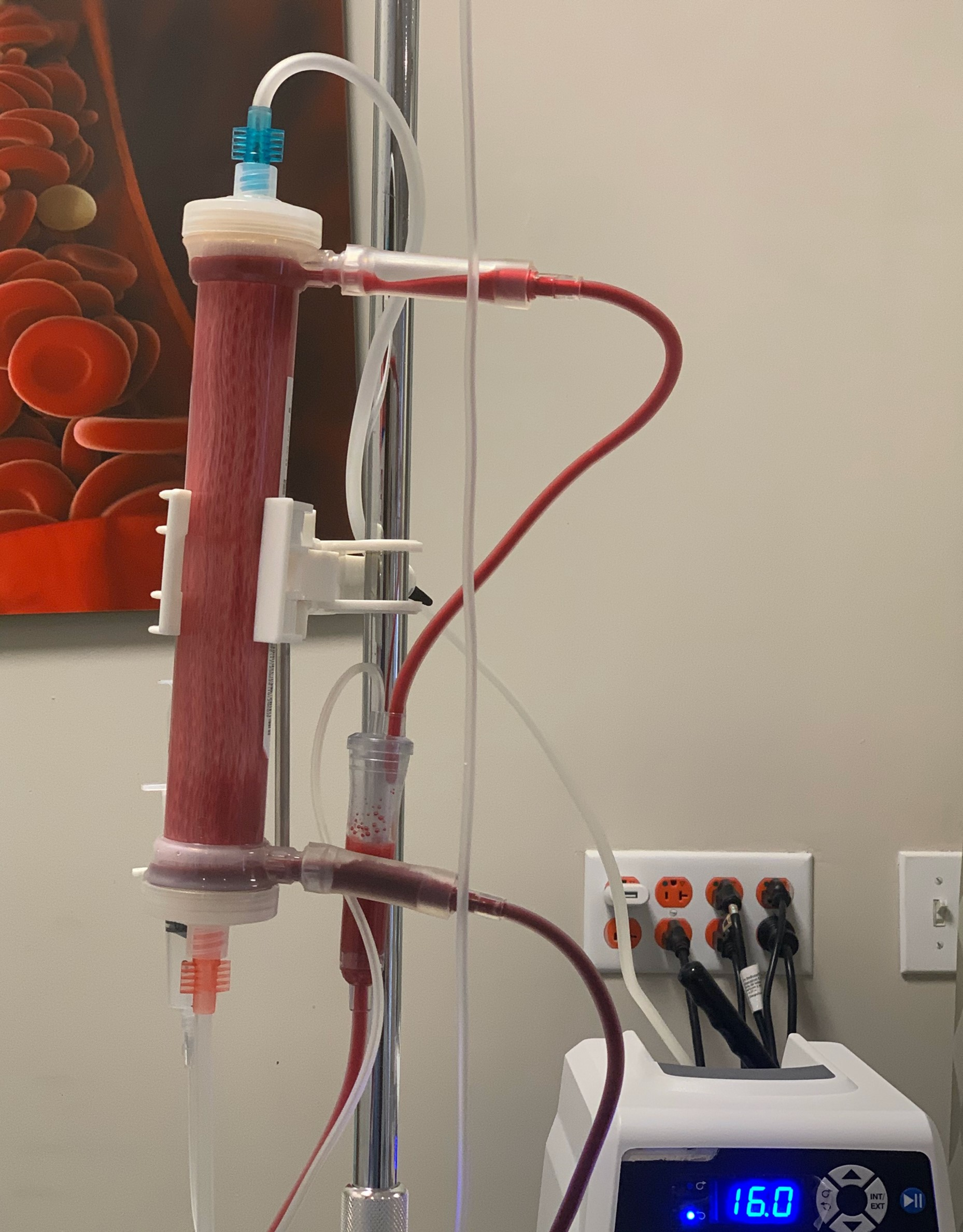 Another important supplement perhaps the most important, to stimulate the NQO1 gene is Beta-lapachone, a compound found in the bark of the South American Lapacho tree. It is a potent activator of the NQO1 gene and produces ROS in cancer cells, but reduces ROS in non-cancer cells. Beta-Lapachone is a NQO1 activator. In addition to stimulating the NQO1 gene it stimulates the NRf2 pathway which helps to lower inflammation. Beta-lapacho was very popular a number of years ago. It then seemed to lose it way. Now there is a resurgence in the use of Beta-lapachone on multiple fronts including clinical studies in a variety of universities. A few final thoughts, if a clinic is utilizing NAD+ but not stimulating the NQO1 pathway then they are behind the times. There are a number of clinics which like to dabble in utilizing NAD on their patients. Unfortunately, they are not aware of the basic science of NAD, its effect on senescent cells, methods allowing the body to handle NAD better, and the importance of the NQO1 gene. If you encounter a clinic which is “just” utilizing NAD without addressing these related matters, your best bet is to seek treatment elsewhere!! This will ensure you the best chance of success. It is all a matter of knowing the basic science of the various pathways and how these can be manipulated to the benefit of the patient.

The following illustration gives all the salient points about the NQO1 gene. There is a reason why this is called the Longevity Gene. The answers lie in the illustration. When all is said and done this seems to represent the essence of aging. 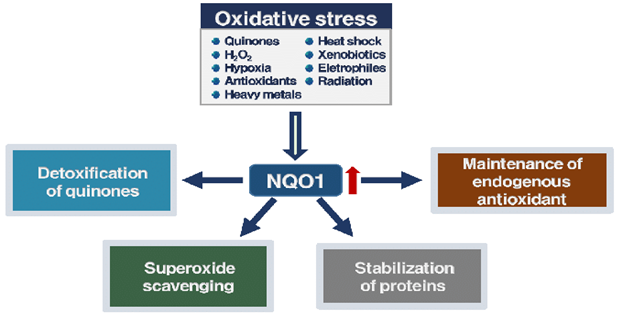