by Dr Joseph Purita
NF- kB is a central regulator in stress response. The NF- kB signaling pathway can be activated by numerous stimuli as listed in the blue boxes:

In response to these different stimuli NF- kB transcriptionally regulates hundreds of genes, the generalized categories of which are listed in the red circles.

NF-kB is a short name of Nuclear Factor kappa-light-chain-enhancer of activated B cells. It is not a single protein, but a small family of inducible transcription factors that play an important role in almost all mammalian cells. As a common responder to varied stress stimuli, NF-kB is well positioned to play a key role in driving aging. NF-kB has been directly implicated in the aging process. Many biologic pathways implicated in aging, including immune responses, cell senescence, apoptosis, genotoxins (a genotoxin is a chemical or agent that can cause DNA or chromosomal damage), oxidative stresses, cell cycle progression, and inflammation all stimulate the NF-kB family of transcription factors. Transcription factors are proteins that help turn specific genes "on" or "off" by binding to nearby DNA. The function of transcription factors is to regulate or turn on and off genes. It is very important that transcription factors make sure that the genes are expressed in the right cell at the right time and in the right amount throughout the life of the cell and the organism.

NF-κB is found in almost all animal cell types and is involved in cellular responses to stimuli such as stress, cytokines, free radicals, heavy metals, ultraviolet irradiation, oxidized LDL, and bacterial or viral antigens. NF-kB plays a key role in regulating the immune response to infection. Incorrect regulation of NF-kB has been linked to cancer, inflammatory and autoimmune diseases, septic shock, viral infection and improper immune development. For instance, the Covid-19 virus seems to have an affinity for activating the NF-kB causing potentially a cytokine storm and dire consequences.

Damage to cellular macromolecules and organelles is thought to be a driving force behind aging and associated degenerative changes. However, stress response pathways activated by this damage may also contribute to aging. The IKK/NF-κB signaling pathway has been proposed to be one of the key mediators of aging. It is activated by a variety of factors as mentioned above. Transcriptional activity of NF-κB is increased in a variety of tissues with aging and is associated with numerous age-related degenerative diseases including Alzheimer’s, diabetes and osteoporosis. 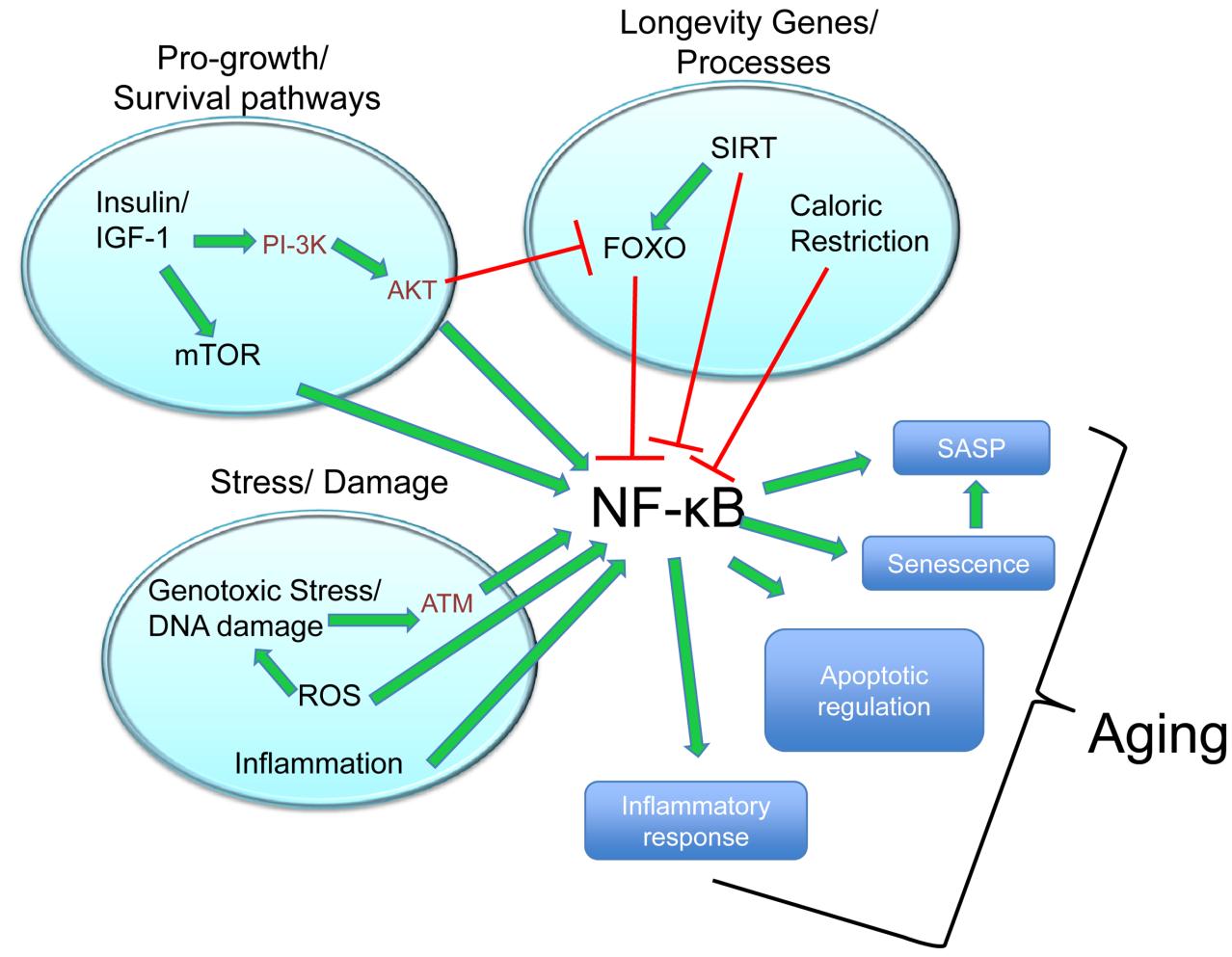 The preceding diagram gives some idea as to the relationship between the NF-kB pathway and aging. One is able to see the relationship between many different pathways in the body and the NF-kB pathway. Interestingly, some of the pathways seem to be opposed to each other. For instance, the pro-growth and survival pathways seem to be opposed to the longevity pathways. The pro-growth pathways are nutrient sensing pathways. They favor cell growth and survival but not necessarily longevity. This is where we start getting some controversy in Anti-Aging medicine. There seems to be a perception that HGH, better known as Human Growth Hormone, is a fountain of youth. This concept is cloaked in controversy. Indeed, HGH can reverse some aspects of aging BUT, AND THIS IS A BIG BUT, this will also stimulate NF-kB which is associated with aging. On the other hand, caloric restriction and the Sirtuin pathways will block NF-kB and thus block aging. For those of you who wish to take a regimen of HGH you may want to think twice about it. However, research shows if HGH is increased naturally (intensive exercise etc.) than NF-kB may not be stimulated in the same manner and aging not encouraged. We also see that stimulation of mTOR will encourage NFkB and possible increased aging. In the above diagram we also see that the AKT pathway (another nutrient sensing pathway) will encourage NFkB activation by disabling the FOXO pathway which is an important longevity pathway. We must remember that not every aspect of the NFkB pathway is negative. It can be important in infections and general stimulation of the immune system.

HOW DOES NF-kB PATHWAY GET ACTIVATED? 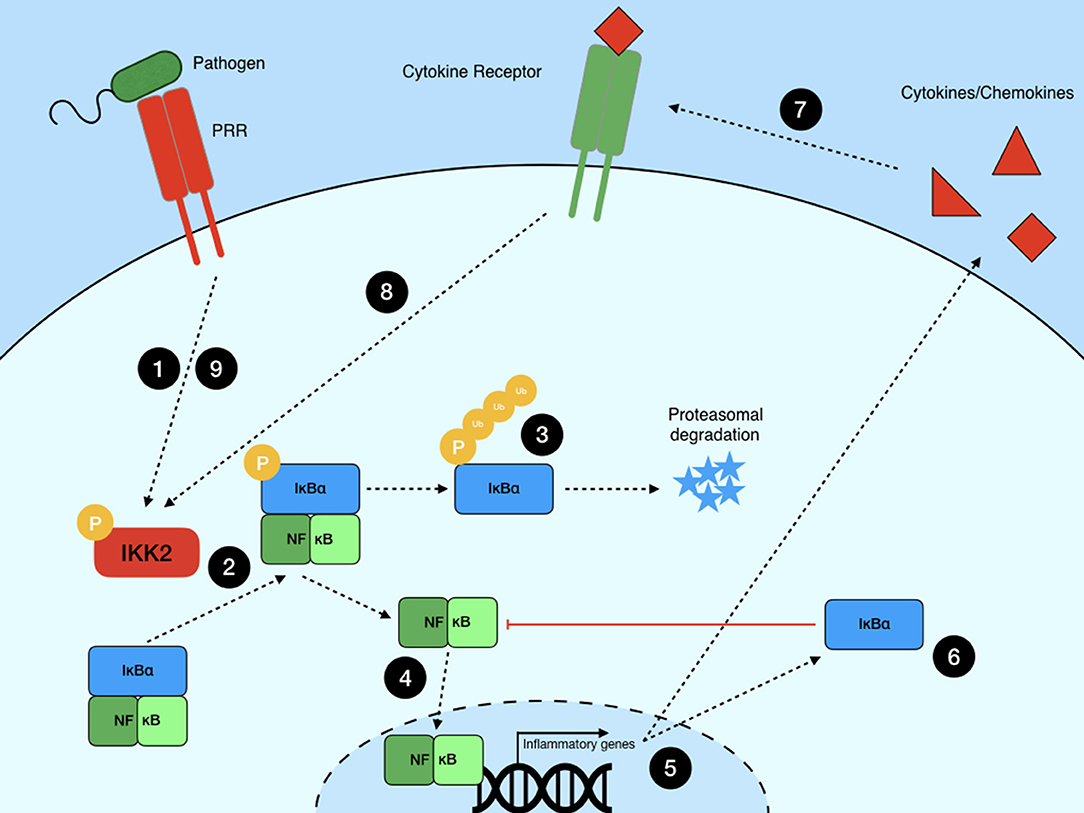 The above diagram shows what is called the Canonical NF-kB signaling pathway. NF-kB signaling is initiated when a cytokine growth factor receptor (PRR) recognizes its cytokine, starting a signaling cascade (1) that converges on the phosphorylation of the IKK2 complex. IKK2 then phosphorylates IκBα (2), leading to NF-kB activation and (3) subsequent degradation by the proteasome of some of the NF-kB components. This releases NF-κB (the two green colors) from negative regulation while they are in the cytoplasm. (4) allows the NF-kB dimers to translocate to the nucleus to (5) initiate inflammatory gene transcription. (6) De novo synthesis of IκBα acts as a negative regulator of NF-κB-dependent transcription, limiting inflammation in the absence of further signaling events. (7) Primary response genes include those encoding cytokines such as TNF. (8) Release of these proteins leads to autocrine signaling through cytokine receptors. This, or (9) continued PRR ligation, create a positive feedback loop wherein NF-κB is periodically activated until these signals are eliminated.

This is a somewhat complicated picture of how NF-kB works. The important thing to remember is that when the NF-kB is in the cytoplasm of the cell it is essentially inactive. Remember it is a transcription factor and thus it must move into the nucleus and stimulate the DNA to start its work. When it gets stimulated to move into the nucleus it starts to turn on certain inflammatory genes to produce biological compounds called cytokines etc. The following diagram is complicated yet it is not as complicated as we might think. What we see here is receptors for two master inflammatory growth factors namely IL-1 and TNF. These two growth factors are responsible for a variety of conditions including osteoarthritis, cancer and a host of other diseases. What we need to know on this diagram is that these inflammatory growth factors ultimately stimulate NF-kB. We must also realize that these growth factors can also help to stimulate an immune response in the face of an infection. 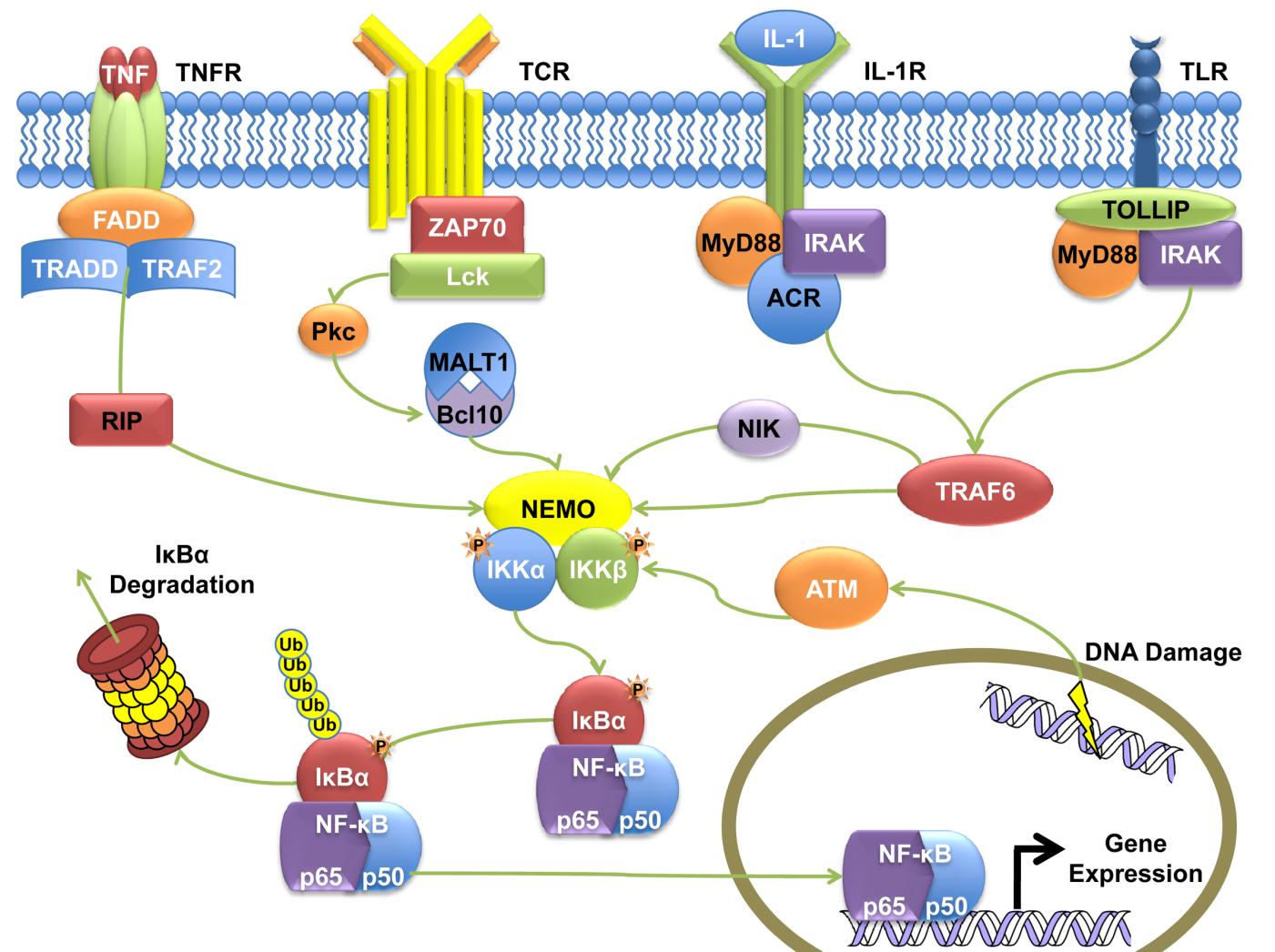 In the above diagram we are able to see that two main inflammatory cytokines namely IL-1 and TNF are picked up by the cell surface receptors and stimulate the release of NF-kB from the cytoplasm when it goes into the nucleus stimulating the production of inflammatory agents.

BESIDES CAUSING AGING WHAT ELSE DOES NF-kB DO? SOME GOOD THINGS 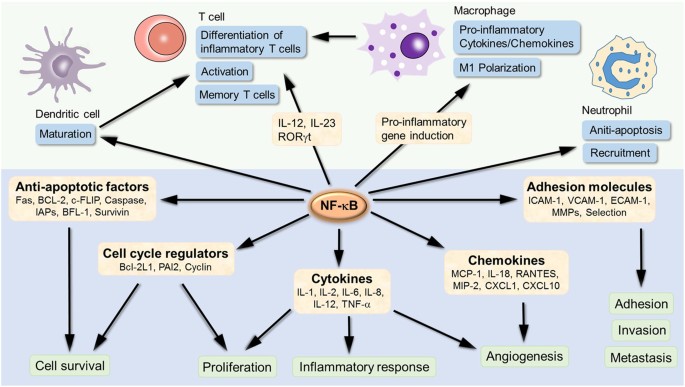 The above diagram shows the many faces of NF-kB. Inflammation in cells and tissues has a common pathway: activation of nuclear factor kappa B (NF-kB). “Nuclear” in this case refers to the nucleus of the cell, where chromosomes carry genetic information that influences NF-kB. When NF-kB gene expression signals move into a cell’s nucleus, it activates pro-inflammatory signals called cytokines. These cytokines travel through the circulatory system to trigger inflammatory changes in tissues everywhere in the body.

Inflammation promotes diseases through an array of biochemical pathways. Inflammation has even been shown to shorten telomeres (nucleotide sequences at the ends of chromosomes). When telomeres shorten, cells eventually stop functioning, directly contributing to shortened cellular lifespans. What we also see in the above diagram is the fact that NF-kB will also influence the type of macrophages in the “neighborhood”. It is responsible to produce type 1 macrophages. Type 1 macrophages are very important in fighting infections. While a type 2 macrophages are important in tissue regeneration. It also appears that NF-kB may have a similar effect on the polarization of mesenchymal stem cells (MSCs). Like macrophages, there are two types of MSCs namely type 1 and type 2. Type 1 is very efficient in fighting infections while type 2 is important in tissue regeneration. NF-kB will cause the polarization of MSCs to the type 1.

What is also very important in this diagram is the fact that NF-kB is intimately involved with various aspects of the immune system. NF-κB is a master regulator of innate immune responses, and vital to many of the roles that macrophages and other innate immune cells play in orchestrating the inflammatory response to pathogens. It can help extend the cell life of various cells of the immune system by inhabiting apoptosis. Considered broadly, immune responses can be divided into innate and adaptive responses. The immune response begins with the host recognizing the presence of foreign pathogens, followed by responses at the cellular, tissue and organismal levels, that ultimately lead to the clearance of the pathogen. As such, immune responses can be broken down into individual signal transduction events through which changes in the extracellular environment elicit altered gene expression at the cellular level. In many instances, NF-κB is the transcription factor that mediates these transcriptional changes. The gene products characteristic of early events in immune responses include cytokines and other soluble factors that propagate and elaborate the initial recognition event. The activation and modulation of NF-kB is also a common target of these factors. Thus, in a surprising number of situations NF-kB mediates the critical changes that are characteristic of innate and adaptive immune responses. This has significant implications in the management of the Covid-19 virus.

THE ROLE OF THE NFKB PATHWAY IN MECHANOTRANSDUCTION 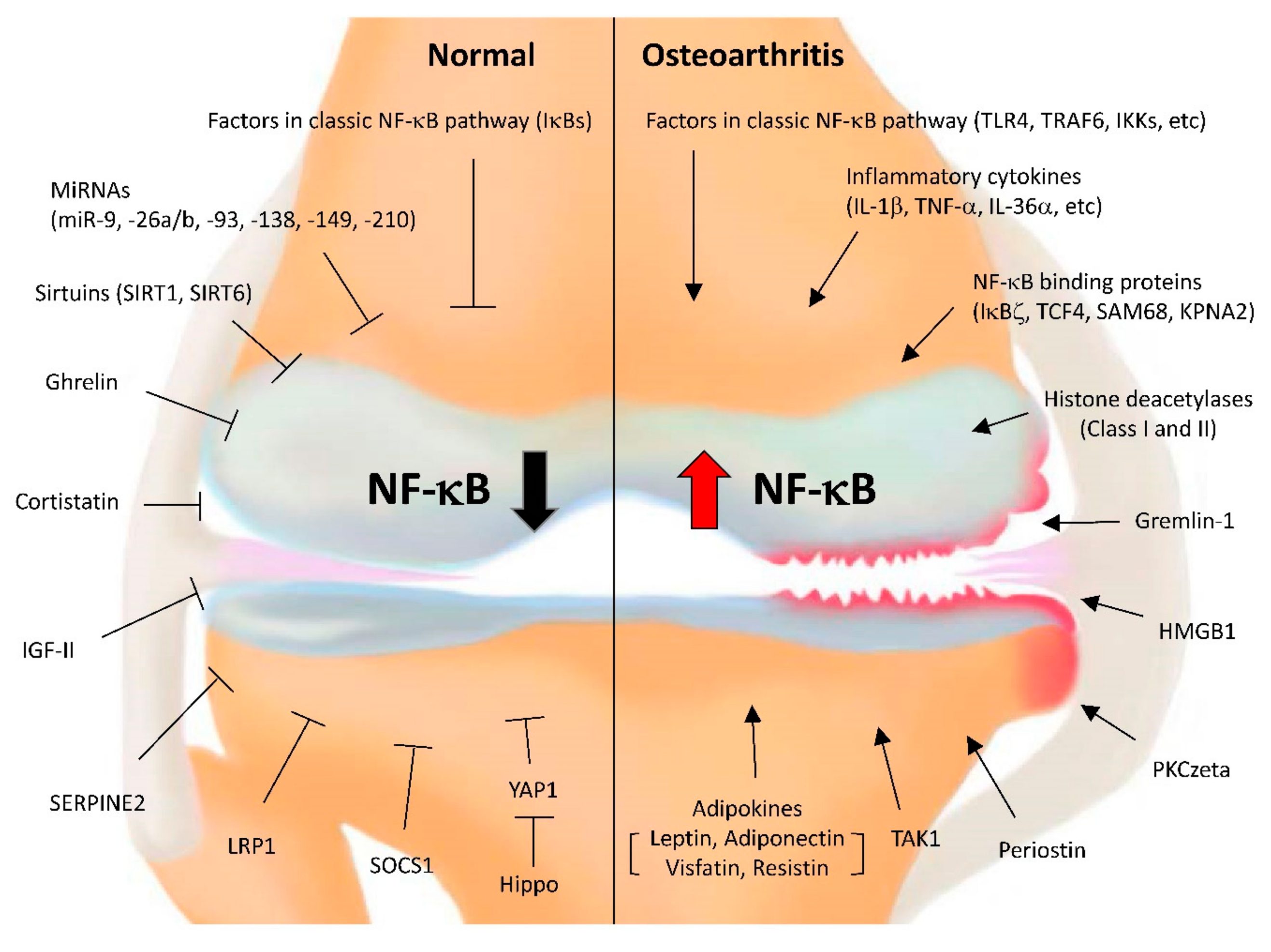 Apart from its prominent role in immune response regulation, NF-kB is also identified as a mediator of mechanotransduction in several cell types. Mechanotransduction refers to the processes through which cells sense and respond to mechanical stimuli by converting them to biochemical signals that elicit specific cellular responses. This role is carried out through changes in both its activation, and localization, in response to mechanical signals. Altered cytoskeleton dynamics of a cell, for example, will activate NF-κB. A good example of this is osteoarthritis as is noted above.

WE CAN NOT LIVE WITHOUT NF-kB

Given the enormous number of genes activated by NF-kB and the diverse modes of signaling that impinge upon these transcription factors, there remains much to learn. As can be seen there are a number of roles for the NF-kB pathway. In the past years NF-κB dynamics emerged as key regulators of cell life and death. This family of transcription factors, which in healthy tissues controls tissue homeostasis, responds to external stimuli and coordinates cell growth and differentiation, is often deregulated in cancer cells. Most of these pathways are bad in that they cause inflammation in the body. However, the effects of the NF-kB on our immune system especially in times for a bacterial or viral invader can be lifesaving.