In 1972, Easter Island, called Rapa Nui, famous for its Moai statues, offered a new wonder: the discovery of the drug rapamycin named after the island's Polynesian name, Rapa Nui. Over the past three decades, rapamycin, which was isolated from soil bacteria, has been applied as an immuno-suppressor in a multitude of ways, including to coat coronary stents and to reduce the immune responses in people who receive organ transplants. Currently, it’s garnering attention because of its potentials in anti-cancer and neuroprotection as well as anti-aging therapies. Rapamycin has extended the expected lifespan of middle-aged mice by 28 percent to 38 percent. In human terms, this would be greater than the predicted increase in extra years of life if cancer and heart disease were both cured and prevented. Aging researchers currently acknowledge only two life-extending interventions in mammals: calorie restriction and genetic manipulation. Rapamycin appears to partially shut down the same molecular pathway as restricting food intake or reducing growth factors. We can see in this illustration of this concept. What we do notice is that caloric restriction intimately tied in with longevity. 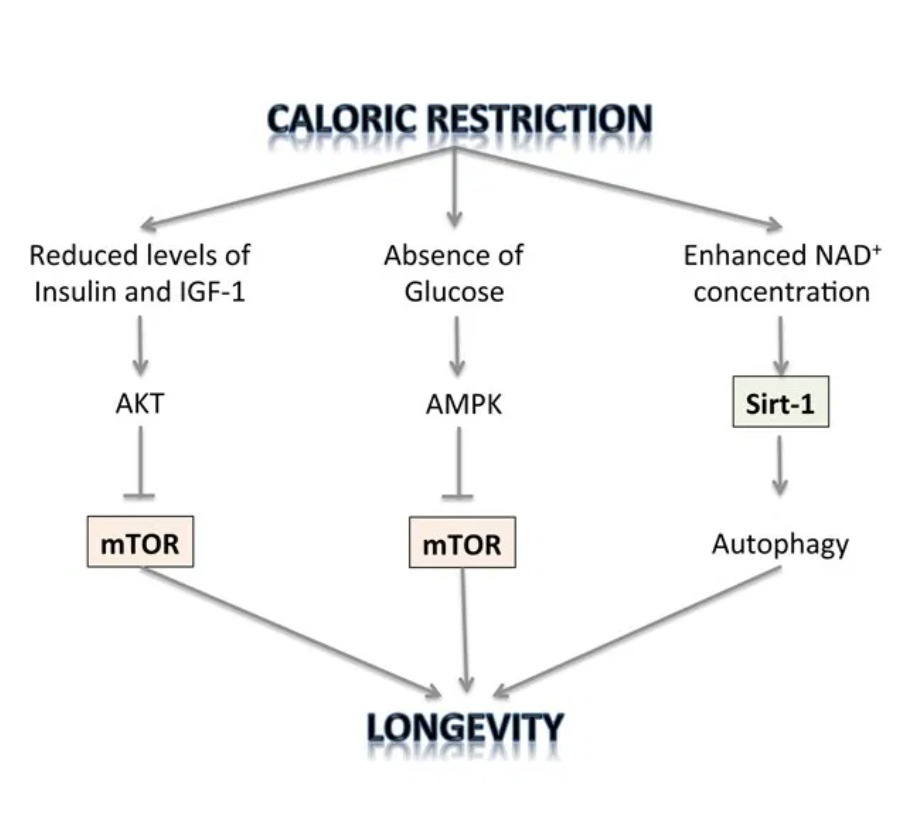 Rapamycin works by targeting a master regulator of cell growth in our cells called mTOR pathway. mTOR is a kinase which is a protein that phosphorylates (adds a phosphate group) to an amino acid. This is important because the phosphate group basically acts as a flag telling other proteins to bind on top of the phosphate. A bit more about kinases. As one of the most abundant gene families in humans, protein kinases tightly control cell signaling via pathways and cell function through protein phosphorylation. What is a pathway and how do we put it into the proper prospective? I saw an excellent article that gave a great analogy on how pathways function in the body. Think of the cell and all its different organelles (such as mitochondria) as the computer hardware and the biological pathways act as the software. We might not be able to change our hardware but we can modify the software. This is the essence of Anti-Aging medicine.

When we want to truly alter the course of aging we typically need to influence the pathways or the “software”. All too often aging problems are attacked by altering the downstream causes of aging. This is typically not an effective method of treating aging.

When rapamycin targets mTOR, it inhibits cell growth. Many of the problems that come with aging arise from uncontrolled growth or aging cells that have accumulated so much internal cellular debris that they lose healthy functionality. This makes rapamycin a potent anti-cancer drug, since cancer is marked by uncontrolled cell growth. The inhibition of mTOR also triggers autophagy, a process by which lysosomes, the so-called recycling centers of cells, clean up misfolded proteins and damaged organelles. During stress conditions, autophagy can lead to the cell survival by degrading dysfunctional components and providing the building blocks of cells, such as amino acids and lipids for reuse by the cell.

mTOR is involved in every aspect of cellular life and existence. The following diagram shows some aspects of the mTOR pathway. In the case of mTOR we are actually trying to apply the brakes to cell growth and proliferation. In addition, the mTOR pathway is a direct target of the IGF-1 signaling pathway, which is a major driver of aging. Despite talking about mTOR as if it is just one molecule, it functions, in fact, as two separate complexes called mTORC1 and mTORC2 as we see from the following diagram: 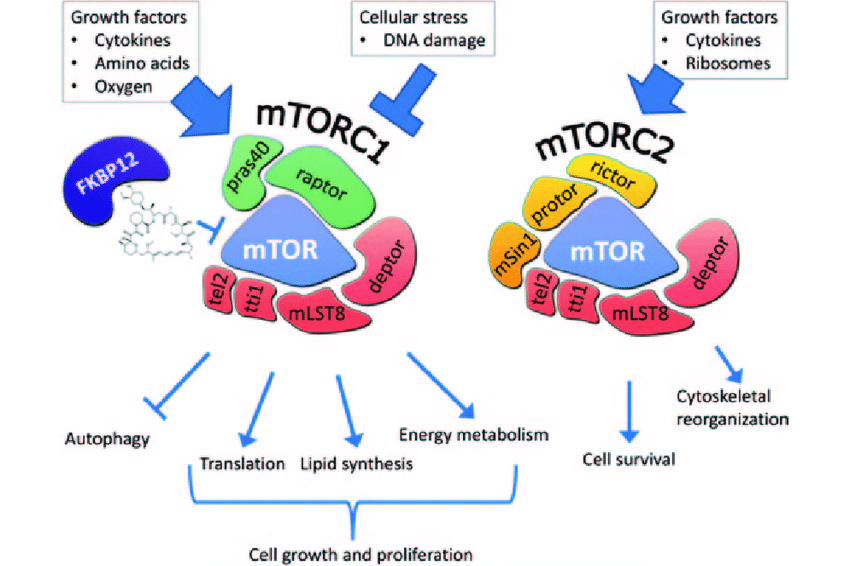 mTORC1 and mTORC2 which are composed of discrete protein binding partners to regulate cell growth, motility, and metabolism. These complexes are sensitive to distinct stimuli, as mTORC1 is sensitive to nutrients while mTORC2 is regulated via growth factor signaling. mTOR can affect cell division processes, the response to stress, and general cell and protein tasks. These signaling pathways are very complicated and depend on many feedback loops, energy supply, and a great variety of other molecules or signals. During certain diseases and aging, the function of mTOR can become deregulated. What does all of this have to do with aging? Many processes that lead to better longevity outcomes, like calorie restriction, fasting, and protein restriction, stimulate autophagy – a process within cells that cleans up broken proteins, bacteria, and viruses. Autophagy stimulates longevity. Aside from regulating cell growth and metabolism, mTORC1 also controls autophagy, an intracellular process that allows orderly degradation and recycling of cellular components. mTORC1 negatively regulates autophagy. The following illustration demonstrates Autophagy. The lysosomes are essentially recycling centers. 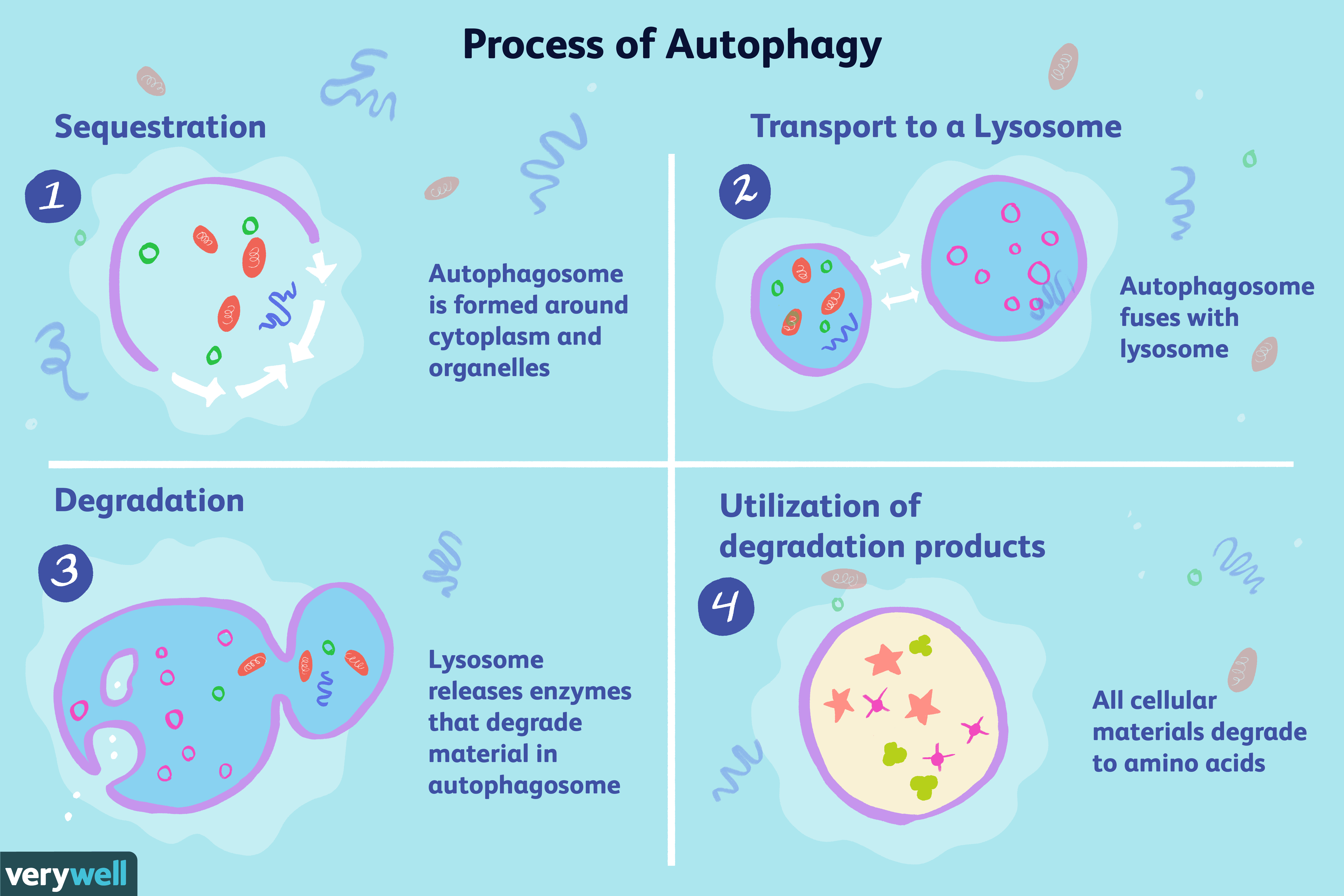 Activating mTOR prevents autophagy from occurring. Autophagy seems to be a crucial component of longevity. Therefore, suppressing mTOR which rapamycin does should have longevity benefits. It is this effect, plus others like its suppression of cell division and growth, that immediately raised interest for its study in the field of aging sciences. But herein lies a cautionary tale for all potential aging therapeutics. Remember, mTOR affects many processes important for biological functioning. We cannot just eliminate mTOR without subsequent problems. We need to walk a fine balance line. 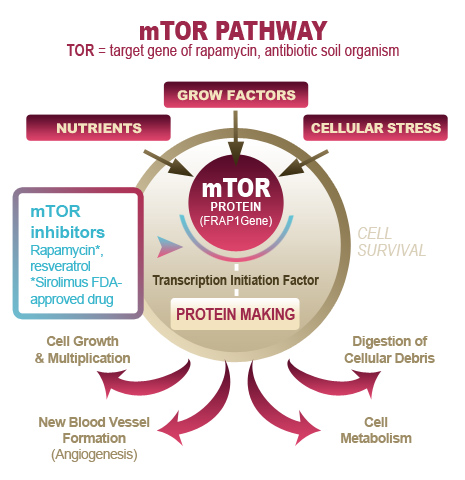 mTORC1 and mTORC2 generally promote an anabolic response by stimulating protein synthesis, glycolysis, mitochondrial functions, and lipid synthesis to influence proliferation and survival, effector and memory responses, innate training and tolerance as well as hematopoietic stem cell maintenance and differentiation. Deactivation of mTOR restores cell homeostasis after immune activation and optimizes antigen presentation and memory T‐cell generation. Antigen presentation and memory T-cell generation are the basis of the Covid-19 vaccines. These findings show that the mTOR pathway integrates information of the environmental and cellular energy status by regulating cellular metabolic responses to guide immune cell activation. Elucidation of the metabolic control mechanisms of immune responses will help to generate a systemic understanding of the immune system and may eventually help us in dealing with the Covid-19 virus.

Should we be concerned when we utilize rapamycin to block the mTOR pathways? Remember, the mTOR pathway affects many processes to keep our cells functioning. Suppressing it too intensely is clearly not good; we need a lighter touch. Like many things in life we need a fine balance. Not only do we need to establish the right dose for us, but we also need to identify the right treatment regimen. In some clinical studies, it took about two weeks to demonstrate significant suppression of mTOR1C. Sensible usage strategies (if there are any) for rapamycin could, for example, be for those aged 60 years and older to either use a low daily dose or to use it for 30 days at a time every 6 months or so. Low-dose, short-term rapamycin in healthy humans has been found to be safe, with few or no side effects. It’s possible that rapamycin can be given to healthy humans with fewer side effects than occur in transplant recipients. Healthy men given a single dose of rapamycin of roughly 16 mg/kg had no significant difference in the incidence of adverse effects between treatment and placebo. Healthy elderly volunteers given everolimus (a rapalog of rapamycin) at 0.5 mg daily, 5 mg weekly, or 20 mg weekly, for six weeks, had no serious adverse effects associated with the drug. The most common associated side effect was mouths ulcers. The treated groups had higher antibody titers in response to flu vaccines compared to controls, implying better immune function. Note that this is a much lower dose than the doses given in mouse studies of rapamycin. A rapalog is a class of molecules that has rapamycin-like activity but is not confined to chemical derivatives of rapamycin. A rapalog is also known as an analog.

Unfortunately, treatment with rapamycin and its analogs/ rapalogs is associated with negative side effects that limit their potential utility as anti-aging therapies. These side effects include immunosuppression, glucose intolerance, an increased risk of type 2 diabetes, and disruption of lipid homeostasis. Although short term, low dose, and/or intermittent rapalog-based regimens may partially limit side effects, and trials of rapamycin in the elderly have begun, the efficacy of such treatment regimens in treating age-related diseases remains to be determined, particularly as the effects of rapamycin on longevity are dose-dependent. All three FDA-approved rapalogs sirolimus, everolimus, and temsirolimus have similar effects on the glucose metabolism and immune cell profile of mice. It is clear that there is an urgent need for new molecules that inhibit mTOR signaling with reduced side effects. There are some studies that claim the Metformin may also target mTOR. Taken together, rapamycin and metformin are promising candidates for life and healthspan extension; however, concerns of adverse side effects have hampered their widescale adoption for this purpose. It appears that the two may cancel out the unwanted side effects of each.

Recent studies have demonstrated that a number of natural products, nutraceuticals, isolated from plants (e.g. fruits, vegetables, spices, nuts, legumes, herbs, etc.) also inhibit PI3K/Akt/mTOR pathway, and exhibit potent anticancer activities and probable antiaging activities. As most of the natural products occur in our diet every day, and are very safe, the results suggest that those natural products may be explored for cancer prevention and treatment. This special issue selects apigenin (present in many fruits, vegetables), curcumin, cryptotanshinone (Asian herbal compound), fisetin (compound from various berries), indoles (Cruciferous vegetables), isoflavones (genistein and deguelin), quercetin, resveratrol, and tocotrienol (a form of Vitamin E).

Immunologically, mTOR has a fundamental part in controlling and shaping diverse functions of innate and adaptive immune cells, in particular, T-cell subsets differentiation, survival, and metabolic reprogramming to ultimately regulate the fate of diverse immune cell types. We must remember m TOR is a kinase. As one of the most abundant gene families in human, protein kinases tightly control cell signaling and cell function through protein phosphorylation. There are 634 protein kinases encoded in human genome to date, and 85% kinases are observed dysregulated in human disorders. However, only 49 small molecule kinase inhibitors have been approved for treating human diseases, urging for more in-depth investigations on the rest 77% possibly druggable kinome. Among all protein kinases, mTOR (mechanistic target of rapamycin, previously known as mammalian target of rapamycin) has drawn extensive attention. This is due to its indispensable roles in regulating key cell function such as proliferation, metabolism, autophagy, ageing, and others, and its ability to sense environmental changes including nutrients and growth factors to adjust cell physiology. Dysregulation of mTOR signaling is observed in solid tumors, epilepsy, obesity, and diabetes.

The bottom line for the mTOR pathway is intermittent fasting, calorie restriction, a number of different supplements, and some intermittent rapamycin in the prescribed dosages and regimens which include Metformin. I suspect, as we refine things, we will see much more of rapamycin use. I suspect mTOR inhibition is just the tip of one of the icebergs.